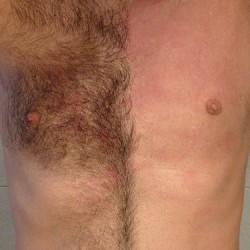 Laser Hair Removal for Men – More Common Than Ever

Removing hair from the body has been a chore that men and women have had to endure for ages. Typically, men have resorted to the traditional razor and shaving cream to remove facial hair. They have also used the razor for other areas like legs and back. Recently, however, a new method has become more popular for men. It is called laser hair removal.

Laser hair removal for men has gotten increasingly popular as the benefits have been more advertised to men. This non-surgical procedure is basically where a laser is targeted at areas where hair is to be removed. The light from the laser kills the follicles surrounding the hair and prevents hair from growing again after a few treatments.

Laser hair removal for men is getting more popular due to the wide range of areas that it can treat on men. It can be used to remove hair on areas that require constant grooming because it grows a great deal of hair. This can include the chest, back and stomach. Laser hair removal can be done on the face as well, but it is not as popular as the procedures done on other areas.

Cyclists had been shaving their legs for quite some time to reduce drag when racing. It also helped with healing from road rash when they crashed. Shaving took a great deal of time, and had to be repeated on a fairly regular basis. The same is true for swimmers. Body builders also embraced it quickly because they tend to favor very little body hair for competition reasons. Laser hair removal made it possible to get hair removed over the course of a few sessions, and not have to worry about it anymore.

As the popularity of laser hair removal grew it became embraced by men in everyday life. They enjoy the time savings it offers because they do not have to do the regular shaving. They also do not have to resort to other methods of hair removal like creams or waxing. Creams and waxing are good for a longer-term solution to hair removal, but they still require regular sessions. And, they can be painful.

Another advantage to laser hair removal in men is they will no longer have to worry about the ingrown hairs they would encounter from shaving and other forms of hair removal. Since the hair is removed through the follicle under the skin there is no chance of the hair growing back under the skin. So, that means no more bumps or infections that would be regularly encountered for other hair removal solutions.

Laser hair removal for men can be a great alternative to traditional means of hair removal. It is safe, convenient and easy. Furthermore, the results will last a long time, if not permanently. It may require annual follow-ups to check that the hair is not growing back. But, it is more of a long term solution that would be had from weekly shaving or waxing.

What You Should Know Before Laser Hair Removal
Tweet
Buffer

What You Should Know Before Laser Hair Removal

One of the best techniques to remove undesired hair is by laser treatment.   In the event that you have been...